With thousands of diverse works arranged without labels or categories, the Barnes invites you to think for yourself, make surprising connections, and speak art’s universal language. We've invited community partners to participate in our #SeeingtheBarnes campaign by selecting a painting from the Barnes collection that speaks to them.

Valerie Gay is the Barnes’s deputy director for audience engagement and chief experience officer. She oversees public and community programs, leads the guest and protection services team, and works to deepen the Barnes’s connections with visitors and the community. “I believe that anyone can find something in the Barnes collection that relates to their own personal story,” she says.

Val’s team manages the Barnes’s many community partnerships, including Barnes @ LoLa 38, an arts collaboration with the People's Emergency Center in West Philadelphia, and Puentes a las Artes, an art-based biliteracy program with Puentes de Salud in South Philadelphia. These programs reflect her belief that arts institutions have to be “radically welcoming and radically hospitable” to truly be positive environments for all.

When asked to choose paintings from the Barnes collection, Val was drawn to portraits that express self-possession and confidence. “I love how they all show the same qualities differently—in their eyes, the turn of their lips,” she says. She also cites the importance of representation and identity. “There’s personal choice in how one can be captured; even when you think you don’t have a choice, you still have some kind of power over your own personhood.” Val ultimately chose Glackens’s Armenian Girl because of the subject's confidence and agency. “She knows who she is,” Val says.

How We Did It

See how we paired Val’s image with her chosen artwork. 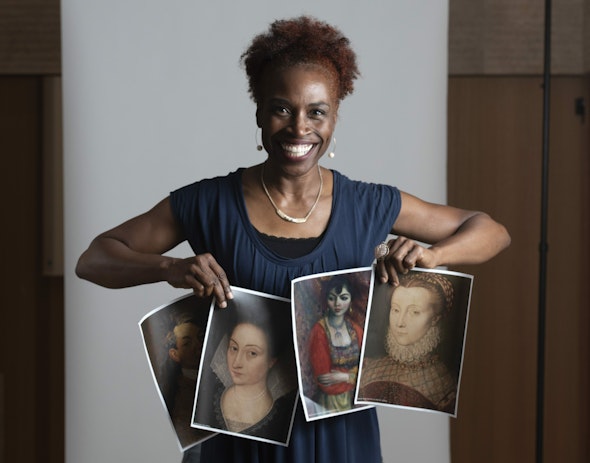 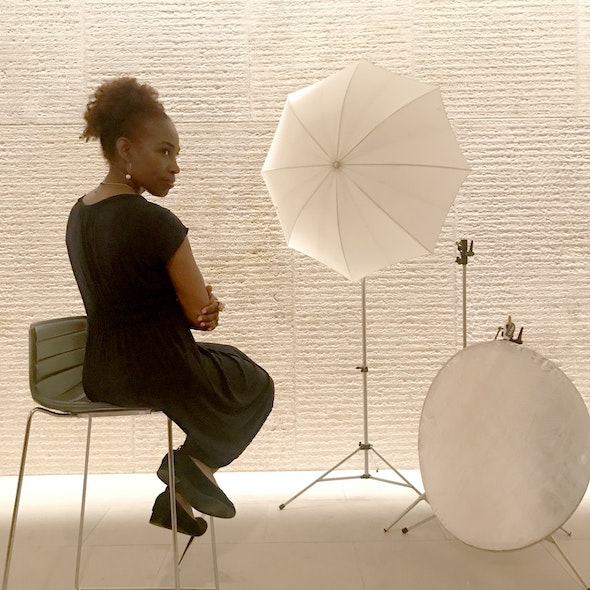 Val sitting for her portrait. 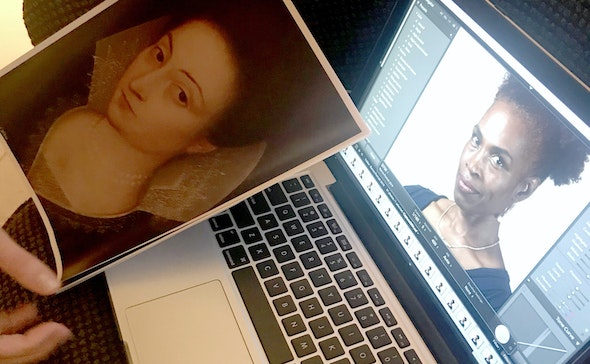 Comparing Val’s portrait with one of her chosen artworks, Head, by an unidentified 16th-century artist. 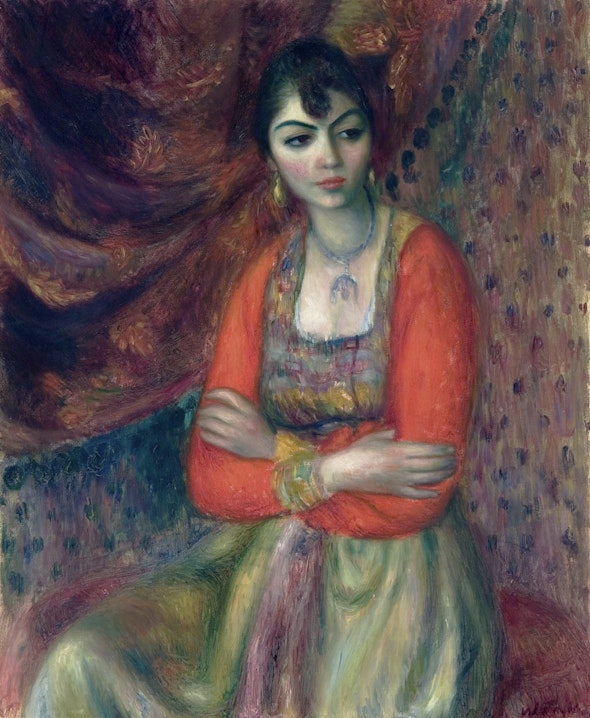 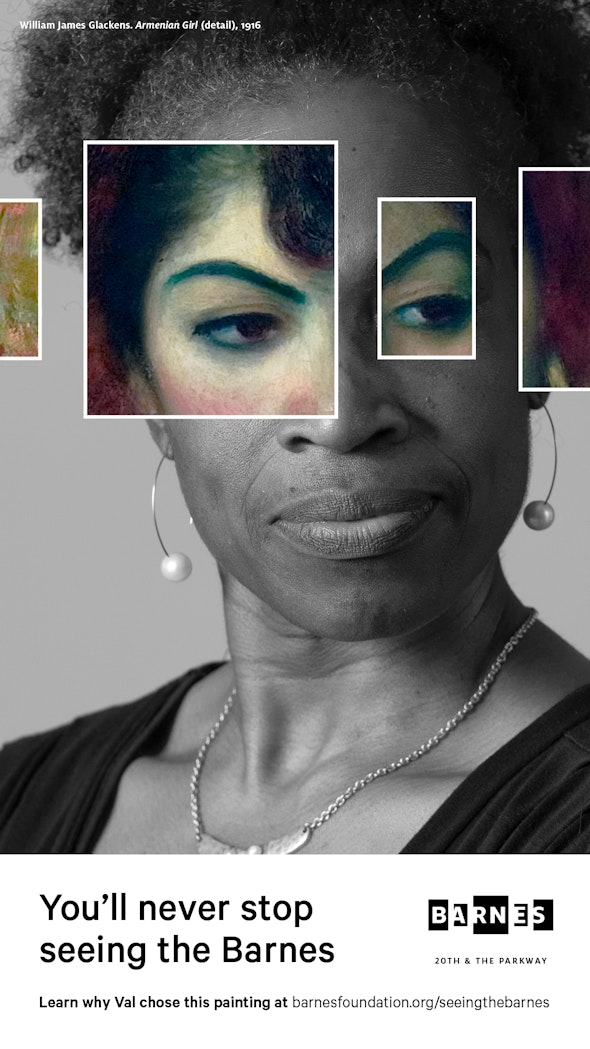 The final ad pairing. Val's verdict: “This image reminds me of what femininity is to me: a mixture of strength and gentleness.”

Meet our partners who have participated in the campaign so far.

Rob Buscher, director of the Philadelphia Asian American Film Festival, credits his biracial heritage for his passion for Japanese and Asian American cinema.

As a community partner bringing Asian artists and performers to Barnes programs like Artist Bash and PECO Free First Sunday Family Day, Rob aims to carve out opportunities for underrepresented talent. “Communities of color haven't historically seen themselves in a museum space unless they are being studied by the dominant culture,” says Rob. He is also interested in bridging divides between class, race, and age, and uniting multigenerational audiences through public programs.

When asked to choose portraits from the Barnes collection that spoke to him, Rob gravitated toward Glackens’s Self-Portrait for his “swag look” as well as Van Gogh’s The Smoker and Tintoretto’s Portrait of a Gentleman for their “epic beards.” In Tintoretto’s painting, he also saw another person of mixed race. 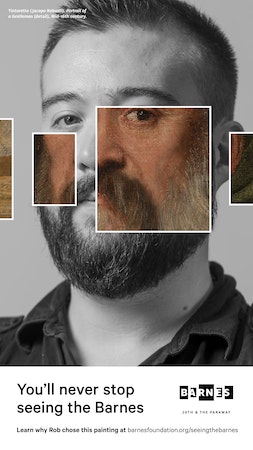 The final ad pairing Rob with Tintoretto's painting Portrait of a Gentleman. 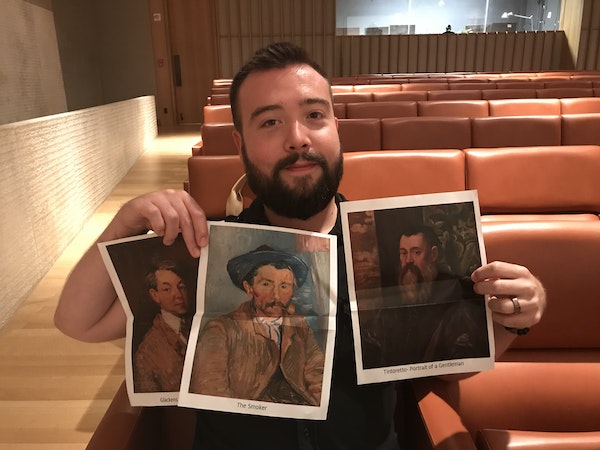 Rob displays his chosen works: Self-Portrait by Glackens, The Smoker by Van Gogh, and Portrait of a Gentleman by Tintoretto. 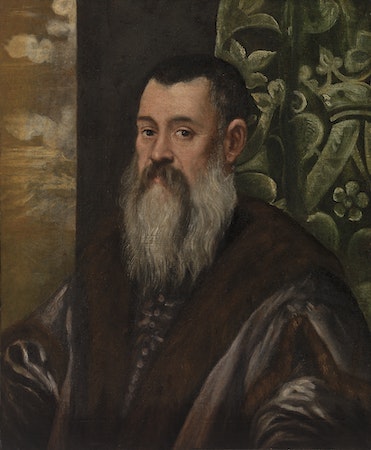 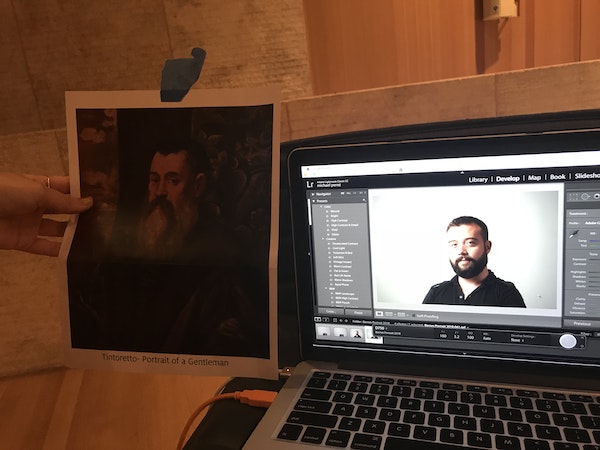 Erica Hawthorne, founder of Small But Mighty Arts, a program empowering Philadelphia artists, views the Barnes as a living bridge for connecting art and community. Likewise, her group's mission, which she hopes to further through partnerships like PECO Free First Sunday Family Day and Artist Bash, is to help artists realize that their work has agency and influence.

Erica chose portraits from the Barnes collection of women “showing inner strength and holding their space.” Their quiet confidence reminded Erica of her mother’s words: “wherever you are, that’s where you should be.” Building Small But Mighty Arts from the ground up, Erica has learned to hold her own space while expanding access for the artistic community.

The final ad pairing Erica with Head, a 16th-century portrait by an unidentified artist. 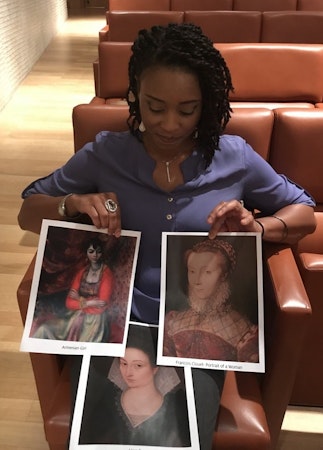 Erica displays her chosen works: Armenian Girl by Glackens, Portrait of a Woman by Clouet, and Head by an unidentified artist. 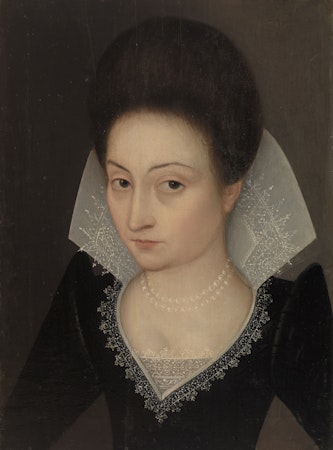 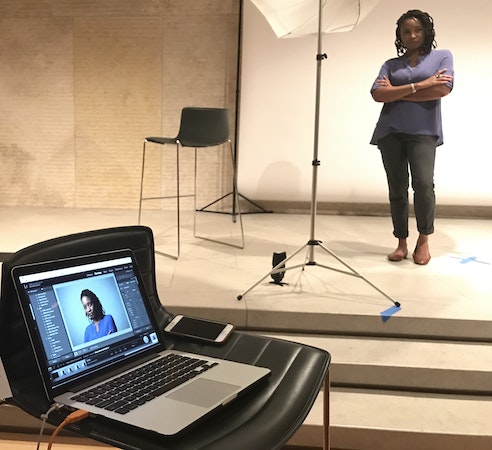 Kathleen Greene, the Barnes Foundation’s curator of public programs, sees the Barnes collection as incredibly diverse—showcasing works from many cultural backgrounds. “Most people think it’s a collection of European artists. It’s not. It’s not exclusively that.”

In 2012, when the Barnes moved to its new home on the Parkway, Kathleen was tasked with bringing in the Foundation’s first-ever lineup of public programs. Since then, she’s remained committed to putting a spotlight on artists and performers that mirror the collection’s diversity and to maintaining the community partnerships that have played a crucial role in public programming.

When asked to choose paintings from the Barnes collection, Kathleen was drawn to two portraits of women: Renoir’s Before the Bath and Glackens’s Woman with Green Hat. She loved the playfulness of women appearing in fancy accessories or bathing in public—both of which she is unlikely to do! 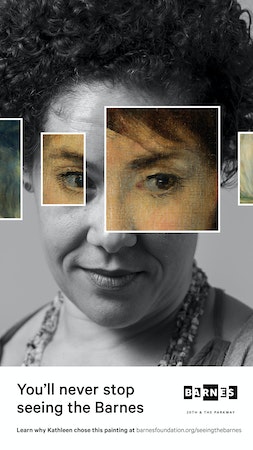 The final ad pairing Kathleen with Renoir’s painting Before the Bath. 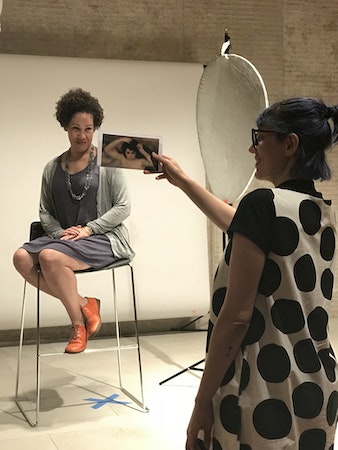 Kathleen sitting for her portrait. 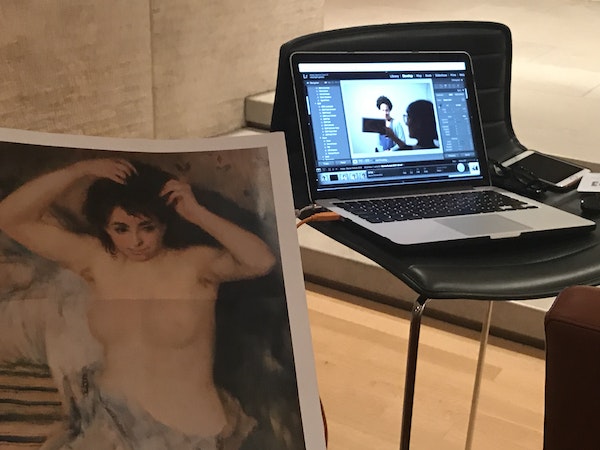 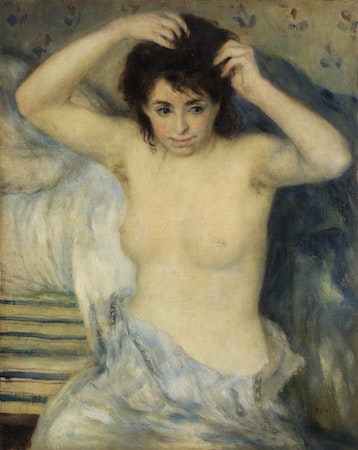 Madhusmita Bora is codirector of Philadelphia’s Sattriya Dance Company. Sattriya is a 500-year-old dance tradition that originated in the Hindu monasteries of Assam, India. Since 2009, Madhu has performed this dance, which she says was “hidden from the world for a very long time,” for audiences throughout the US and India, and in London and Mexico.

As a community partner, Madhu has brought the Sattriya tradition to programs like Barnes Takeover and Barnes Jawn(t). “Our mission has been to make Sattriya relevant to the contemporary audience, connecting people to the stories of Krishna,” says Madhu. Drawing from Dr. Barnes’s universal approach to seeing art, she developed performances and gallery tours inspired by the collection.

She sees many parallels between the art education philosophy of Dr. Albert Barnes and the work of Srimanta Sankardev, the “15th-century Renaissance man” who created Sattriya. Like Dr. Barnes, who made his paintings available to his factory workers, Sankardev turned Hindu scriptures into a form more accessible to the common people.

When asked to select paintings that spoke to her, Madhu picked portraits whose eyes had “the spark of life.” In Glackens’s Armenian Girl, she was drawn to a face that stood out in a collection of mostly white European people. She also picked Child Holding Fruit by an unidentified artist, Before the Bath by Renoir, and Mr. Loulou by Gauguin, for their sense of vulnerability. As an artist who puts herself out there on stage, Madhu confides that “Sattriya teaches you to make yourself vulnerable to the divine.”

When she’s not on stage, Madhu is in the classroom teaching world literature and writing at Lincoln University. 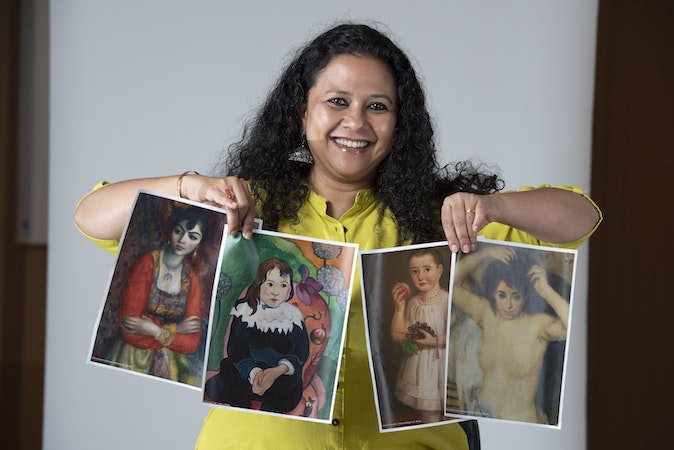 Madhu displays her chosen works: Armenian Girl by Glackens, Mr. Loulou by Gauguin, Child Holding Fruit by an unidentified artist, and Before the Bath by Renoir. 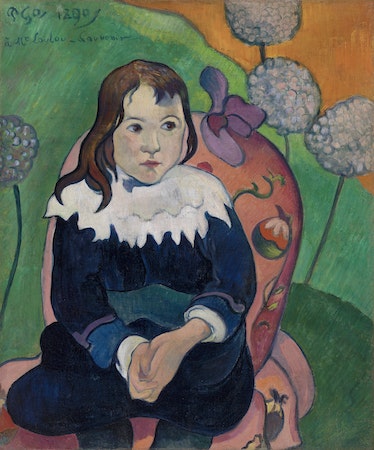 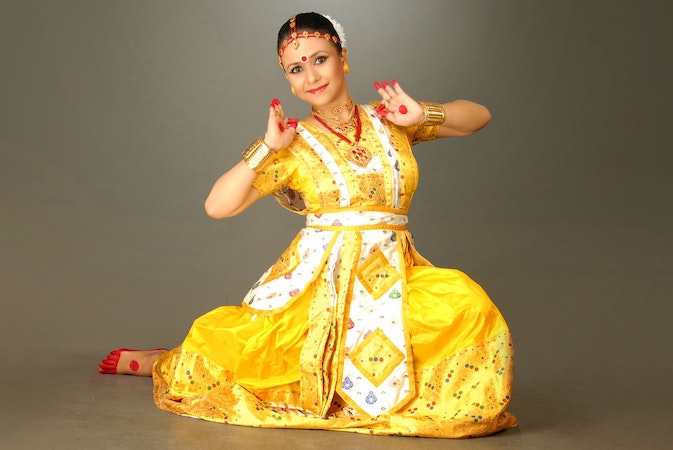 Madhu has brought the Sattriya tradition to the Barnes through inventive programs. 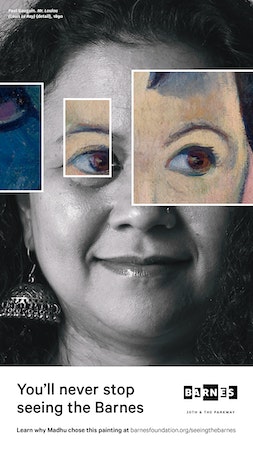 Renowned vibraphonist and educator Tony Miceli has been a frequent headliner at First Friday! programs at the Barnes since its opening celebration in 2012.

“A museum can bring people together,” notes Tony, as he recalls one of his Barnes performances, which paid tribute to Philly jazz legend Grover Washington, Jr. Energized by art and music, this First Friday! event drew an enthusiastic audience that reflected Philadelphia’s diversity.

When asked to explain his chosen portraits from the Barnes collection, Tony replied, “Whenever I look at paintings, I see stories.” Child Holding Fruit, a painting by an unidentified artist, reminded him of family life, and in Glackens’s Self Portrait, he imagined a “shady” character. Van Gogh’s The Smoker brought to mind his work in migrant education throughout the 1980s and ‘90s. For Tony, The Smoker was reminiscent of the “humble and hardworking” people he met in mushroom fields. The painting brought him back to that time when he played and wrote music with their children. 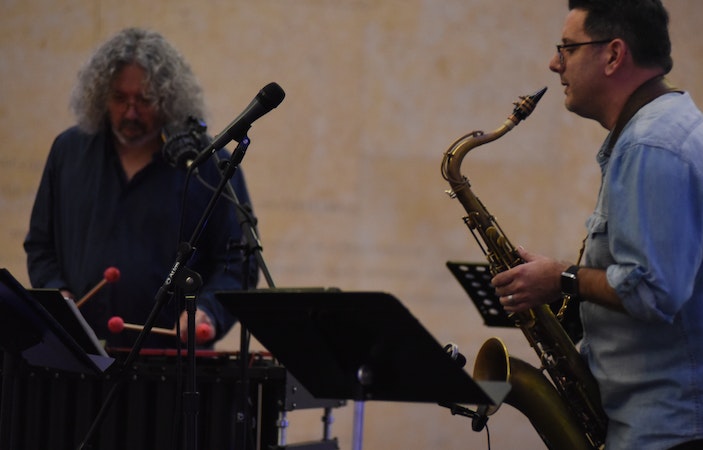 Tony performs at a First Friday! at the Barnes. 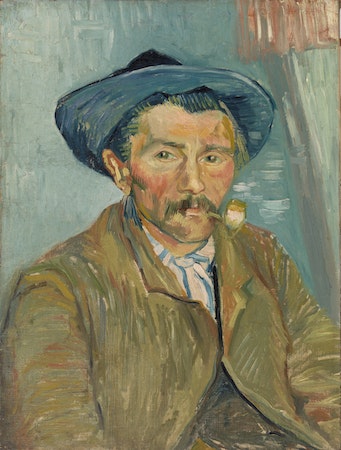 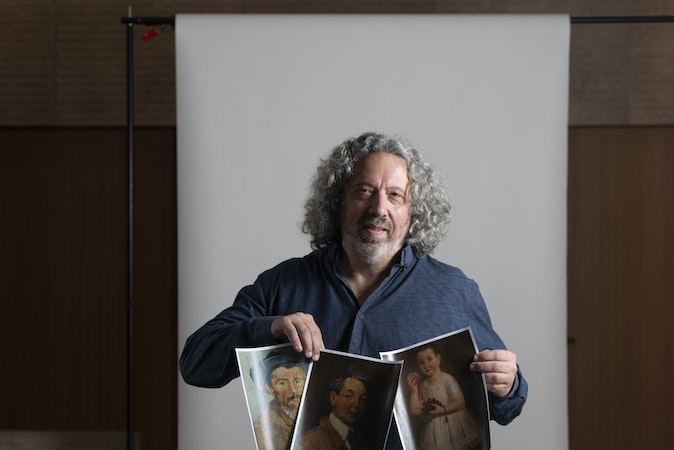 Tony displays his chosen works: The Smoker by Van Gogh, Self-Portrait by Glackens, and Child Holding Fruit by an unidentified artist. 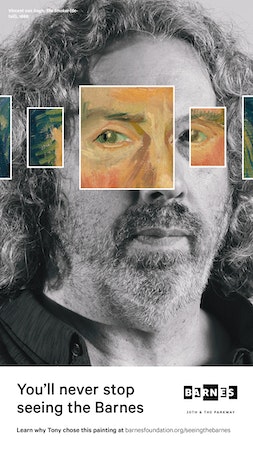 We are sold out through Sunday, January 29. Plan your next visit.